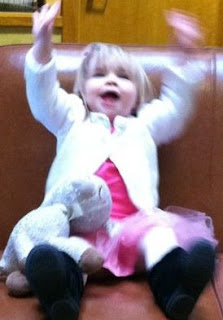 
And perhaps, that idea that all problems have solutions is the most important thing we can teach our young children.  Nowadays the world seems to be full of problems that need clear and focused thinking.  It is also a world that has plenty of negative that we could focus on if we choose.  Unfortunately, before parenting Ila, negativity was my best friend and Eeyore was my nickname.  But I am learning, for the sake of my daughter, to have a positive attitude.  I stumble often, but when I do, I am sure that Ila will be there to say, "That's OK mommy.  Keep trying.  Just keep trying.  Don't give up.  Then you will do a good job!"
Posted by Unknown at 5:31 PM