The Most Meaningful Moment

After pulling the flannel nightgown over my head, I sat down in my worn rocking chair and text Son1:

I leaned my head back waiting for a response and smiled. It had been a particularly satisfying weekend. Son1 was home from college with Magicalfairyprincessgirlfriend so they could rehearse for a Christmas show they'll be performing in soon. The time spent together was chuck full of intellectual college-type talk; psychological theory, professors who rock, assignments that don't, time spent with roommates and on and on.

I opened my eyes and looked at the phone...no response. Hmmm. Usually I get a text from Son1 when he arrives safely back into the arms of his dorm suite because, well, I may perhaps be a bit of a worrier...just maybe, and he knows me so well. (And...no...I didn't expect him to answer if he was driving...Magicalfairyprincessgirlfriend would answer for him typically under that scenario.)

I continued to stare at the screen, willing it to answer. It didn't and so I text:

Knowing myself, I got up from my chair and went to the bathroom to wash my face and to keep my mind occupied. I scrubbed away still smiling at the time spent with those two crazy kids...adults...kid-adults...Anywhooo...I was smiling, smiling large. I smushed that smile along with the rest of my face into a fluffy towel, patted it dry and walked back to my chair where the phone rested. Nothing...nothing at all. Just two lonely green talk bubbles with my texts echoing on a vast white screen. And looking back on it now, that's when it probably happened...my gruesome mom-imagination kicked in...It started as a flash of an image; a car turned over laying on its roof, two pieces of my heart laying in hospital beds. Cell phones flung hither and yon not to be found and so no way for the emergency officials to know how to find me...the mom.  From there my brain moved on to some freak snow storm that somehow fell just on the Mass Turnpike, dumping feet and feet of the slippery white stuff and forcing Son1 to pull off the road. There they'd sit, stranded...gas light on...contemplating wrapping the seat upholstery around their feet so that they could walk to safety. (Clearly I watch wayyyy too much reality tv!)

I stood up quick and waved my hand to clear my frantic and overworked mind, picked up the phone and text: 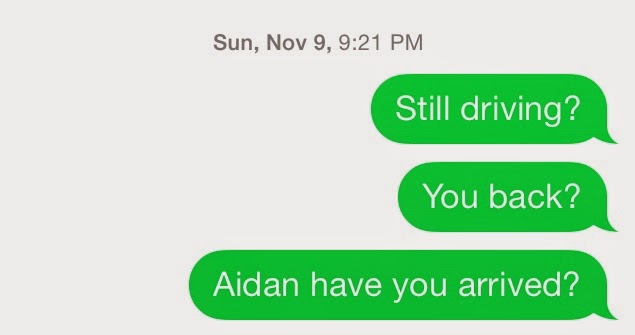 When he didn't answer, I moved on to Magicalfairyprincessgirlfriend--no answer there. I decided on one more desperate text: 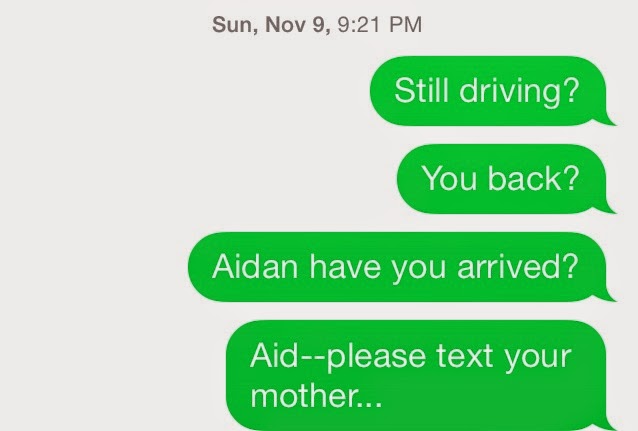 After 6 or 7 (or maybe 8)  direct phone calls to both Magicalfairyprincessgirlfriend's and Son1's phone, both of which went directly to voice mail fueling the cellphone-has-flown-out-of-the-car-during-a-bloody-car-wreck theory, I went sort of crazy. (Okay, crazIER than just five minutes before.) I will spare you the minute details of that mini-breakdown but they just may include a frantic call to my local state police office inquiring about how to find out about accidents on state roads, a Facebook message to Magicalfairyprincessgirlfriend's mother and perhaps one to a suite-mate of Son1's (although if pressed I will plead the 5th...) Those details may also include a manic and rude awakening of Son1's step-father where I MAY have cried a bit telling him the gruesome details of what I thought had befallen my two dear college students...All of those things MAY have taken place (but once again, if asked directly I will deny, deny and deeeeee--ny!)

Just as I was about to unleash my wrath on a bureaucrat at the state police office who actually had the gall to speak to me as if I was a tad out of my mind (CAN YOU IMAGINE????) the phone buzzed with a call on the second line. It was Son1 apologizing...his phone had died and there was no time to charge it before he and Magicalfairyprincessgirlfriend had to dash off to acapella rehearsal.

Instantly...instantly my shoulders came out of my ears, the nervous maniacal stomach butterflies flew away and I found myself laughing out loud. I plopped down on my bed, and while some of you are probably wondering if my relief soon turned to anger, it didn't. Not at all.

Here's the thing--he's doing it. Son1 is doing it. Everything that I have ever dreamed for him; every-single-thing. I wanted him to take risks. He is. I wanted him to get involved. He is. I dreamed that he'd use his God-given talents. He is. I hoped that he'd know how very worthy he was of friends, and camaraderie, and relationships galore. He does. I imagined him growing and thinking and changing in an intellectual community that carried him into adulthood. He's doing just that.

Mamas, for years we dream and we want and we hope and imagine for our children. While we're in the thick of it...the raising years, the nail biting years, the holy-moly-where-did-this-surly-alien-being-come-from years it doesn't feel as if any of those dreams, wants, hopes and imaginings will ever come to fruition.  How could they when they can't pack a backpack, or pick up garbage that is right in front of them, or manage to wash their underwear more than once a month (if that...)? It seems as if all the things that we wish for our children will never ever come true. But let me tell you Mudders...it will happen. It WILL, and when it does, when we finally understand that they are off...that their wings are spread and they are flying at an altitude that seems downright amazing...when that moment of  realization hits--the feeling, well, it's breathtakingly beautiful. Even if just five minutes before because of a mistake on their part you were convinced that they were lying dead in a ditch somewhere, you will laugh...laugh out loud, because honestly I am not sure that there will ever be a moment more important, more meaningful than the one where it dawns on us that our children are going to be just fine as adults. Just fine indeed.

Posted by Unknown at 3:13 PM No comments: