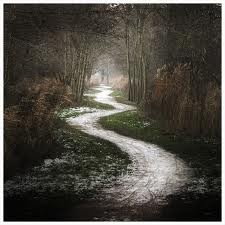 And so...and so...after journeying down this existential road with you dear Mudders, what can we take from it so that we can impart some wisdom to the children we so love and adore?  Well, we could tell them that choices no matter good or bad, smart or dumb, whether conscious or unconscious will shape their lives in ways that they could never foresee.  We can also teach them that choices will present themselves whether significant or slight all the days of their lives, and when they can, they should try and be present and aware of the possible outcomes when making decisions.  But perhaps most importantly, dear Mudders,  we should let them know that making choices, choosing paths takes forethought and insight, and that with any choice comes a chance for growth and developing a sort of stamina necessary to take us down the next path.
Posted by Unknown at 2:57 PM 22 comments: