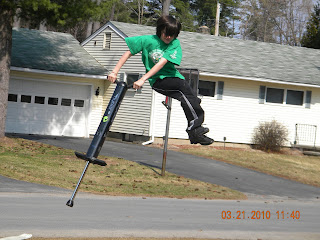 A Post Script:
"Great mom!"  Said Gannan after reading this blog.  "Does that mean I can jump off the roof now?"
"Oh sure dear.  Let me hold the ladder for you!"

Below are two links that I'd love for you to visit.  One is a You Tube video of Gannan on his pogo stick doing back flip dismounts.  I'd like to state for the record that this was filmed at his dad's house, and that I had no say in the absence of the helmet...sigh.  The other link is Mark Mahoney's editorial about Gannan.  Enjoy!


Gannan on his pogo.