My Bullied Son: A Mother's Story 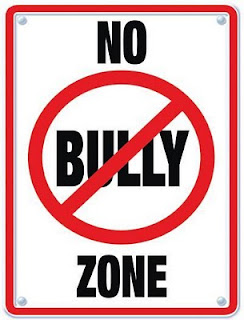 Recently a friend posed a question.  She wondered if it was wrong for a mom to hate a 6th grade girl. Now I don't have the details or the reasons for the strong feelings she is encountering, but the question itself reminded me of similar feelings I had a few years ago when we found out that one of our sons was being bullied severely.  What made that news worse was that when pressing for details, our son revealed that it had been going on for about two years.  When we found out, I experienced a massive jumbled mixture of emotions.  There was an incredulous/guilty feeling that it had gone on for so long and that I had absolutely no idea.  There were signs.  Oh my there were such signs!  He would  make himself throw up so he could come home from school.  He would cry in the morning or stall when it was time to leave.  He would have anger outbursts after school about little inconveniences like no milk in the fridge. Instead of disciplining him for those behaviors, I should have seen them for what they were; symptoms of a bigger problem.   There was also this feeling of deep sadness, almost mourning,  for my son who had to go to school everyday knowing that he'd end up being pushed, shoved, knowing he'd hear cutting words that made him feel worthless and less than the wonderful kid he really is.  The depression that engulfed me when imagining the many scenarios that he must have endured was overwhelming and swallowed me whole.  But the strongest feeling that I experienced was a rage like no other rage I have ever felt.  Every inch of me hated that bully, that child.  Loathed.  Detested.  One night I had a dream that I actually strangled the boy.  I woke up shaky and a nauseous.  The anger had taken over.

Lately there has been a lot in the news about bullies and how they effect kids.  I can tell you from experience that what my son went through has had a profound influence on his self worth, on his self esteem.  It is very difficult for him to succeed at anything.  He self sabotages, doesn't do homework, doesn't try out for solos in chorus that the teacher practically tells him would be his if he'd just take the risk.  During his middle school years and into high school he relived the rejection he experienced in elementary school by setting himself up to fail at friendship again and again.  He set his sights on hanging out  with the popular of the popular.  I realize now that if any of those boys had accepted him into their group it might, for him, have erased the thoughts in his mind that he was unworthy of any friendship.  But alas, it never happened.  The stigma of being "the kid that was bullied" stuck with him for a long time and many kids didn't want to be seen with him.  So they didn't answer the phone when he called or wouldn't include him in trips to a football game or invite him to birthday parties.  He therefore has an extreme anxiety when it comes to calling or asking anyone to do something or go somewhere.  He assumes he will  be rejected.  Fear of rejection, of not being good enough has ruled his life since being bullied.

When my sons were little I remember conversations with them about how to handle it if someone was picking on them.  Looking back, I gave all the wrong advice.  Typically parents tell kids to ignore the bully.  To tell an adult if it continues.  I even did the old, "you catch more flies with sugar than you do with vinegar."  I actually told them that if someone is mean they should try over and over to be nice.  I even recall telling them that a bully is that way because there is something horrific in his or her life that makes them that way.  And all that might be true.  But I know now that it isn't how you teach your kids to handle a bully at all.  Not at all.

The thing is rationalization does work for adults but NOT kids.  For the most part we can remove ourselves from the source of the bullying, therefore not be subjected to it day after day.  Our adult minds are able to understand how truly pitiful it is to be a bully. We can almost sympathize with  abusers who use curse words as weapons because of their lack of verbal intelligence.  We understand how truly weak bullies are when they hide behind the anonymity of  emails or gossip spreading.  We can laugh at the pathetic use of blanket statements like "Did you know everyone thinks this or that of you?"  As adults, we know that those who bully and verbally abuse are damaged in some way and are looking to hurt others to make themselves feel better.  We can dismiss them as the small human they are, and by doing so force them to face that their hateful words and deeds truly are insignificant in our lives. Smart, evolved adults know to never give credence to the ramblings of unbalanced human beings.

But children's minds are not as developed (now there is a revelation!) There is no time for understanding, sympathy, or empathy and there is certainly no time to laugh.  All that bullied kids know, all they comprehend is the humiliation and pain that they go through day after day.  The mental warfare that they experience at the hands of a menacing, seemingly maniacal meanie who is out to make mince meat of them is unbearable and life changing. As my daughter grows up, I will teach her differently. I will tell her that no one deserves to be bullied whether it be physically or verbally. I will tell her that she has a right to feel safe and to protect herself. Don't get me wrong. I won't encourage her to fight, but I will teach her how to be assertive. I will teach her to yell firmly, "Leave me alone!" and that stepping closer to someone and looking them in the eye while saying very sternly, "I am not afraid of you," is the best way to show that she is not someone to be trifled with, that she is not an easy target.

But in my son's case, I must thank the universe for the resilience of the human spirit.  That bullied son of mine is slowly learning through very hard work of his own, that there are kids out there who like him because of who he is and he's befriended them.  He's learning that there are very specific rewards for being the nice guy.  His new girlfriend is evidence of that.  He's learning that he has talents that make him special.  He hones them daily and seeks out where those talents are appreciated.  But the brightest light, the very most illuminated illumination of this whole rotten "getting over the big bad bully thing" is the fact that my son didn't let the bully win.  He is pushing on with his life.  Making the bully's words and deeds insignificant by dismissing him for the small human being he was back then in elementary school.  Head held high he can say with a wink, "I never give credence to the ramblings of an unbalanced human being."  You and me both kid.  You and me both!
Posted by Unknown at 8:34 AM 51 comments: