I Was Sexually Assaulted and These Are My Stories 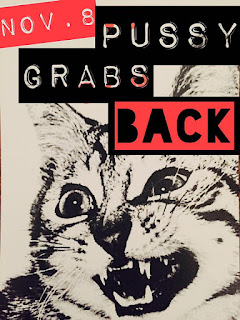 "Grab them by the pussy. You can do anything."

Unless you are living under a rock, you know that these vile words were spoken by Donald Trump 11 years ago while discussing his prowess as a "star" and a sort of "privilege" that it brought.  To Trump, apparently his star status meant that he could sexually assault women and get away with it.

The Department of Justice defines sexual assault as

"any type of sexual contact or behavior that occurs without the explicit consent of the recipient."

And so, of course, touting that you are going to grab a woman's "pussy" fits that definition.  Plain and simple, Donald Trump was musing about assaulting a woman as easily and matter-of-factly as speaking about the weather.

Yet, today I couldn't help but notice that some people, both men and women, argued that this comment was simply bathroom humor, or locker room talk. One man actually used the words, "an ill-advised comment". Honestly, who'd ADVISE someone to say something like that?   No one sane-- that's who.

I consider myself a strong woman.  But, my reaction to this has been so completely visceral.  When I first relayed the story to my husband of what Trump had said, I found myself choking back tears. I shook.  I wrung my hands. It was clear, it was unhinging me.

So to keep me from going crazy over the sheer idiocy of these so-called humans who excuse those flagrantly disgusting comments, I looked to the strong women in my life.  I found refuge in personal friends who stood in solidarity with women like me who refuse to be relegated to  mere sexual objects.  One woman, my beloved friend and brilliant writer, Amy Ferris, urged us to share our own stories of sexual assault. She said,

As I read those words, I realized that part of my strong reaction to Trump's misogyny is my own experience with sexual assault. I have my own story...stories actually...that Trump's comments have brought back to the surface, to the front of my mind. And perhaps the way to rid myself of them once and for all is to share them...finally share them...so that they become part of the collective outrage that will once and for all shut down Donald Trump. And so, today I share my stories of assault. And I urge you to do the same.

The first encounter I had with sexual assault began when I was 14 years old.  I had a paper route that consisted of 90 houses in my own neighborhood.  There was a man who lived just down the street from my house who'd wait for me on his front porch at 5:30 am to get his paper.  At first, I enjoyed seeing him.  He was jovial and seemed genuinely happy to see me.  I'd throw him the paper and he'd make a joke and I'd smile and go on my way.  One day, he was at the end of his sidewalk where it met the curb instead of sitting on the stoop.  I approached him and said hello.  He held out his arms and said, "Can I get a hug from my favorite girl?" And before I knew it, he grabbed me in a bear hug and pressed himself to me. He held on tightly and my arms were pinned to my side.  I could feel his erection against my leg, although I am not sure at the time I really knew what it was.

When he let go, I was uncomfortable and moved on quickly, but I remember chastising myself for feeling that way.  By the end of my route, I had talked myself out of any bad feeling and carried on with my day.  The next morning, he was waiting again.  I instantly felt intense fearful adrenaline pump through me.  I tried to think quickly, but my legs kept taking me toward him.  On this morning, he didn't ask.  He grabbed me and kissed me square on the mouth. It was my first kiss...and it was horrible.

I immediately went home.  I woke my father. I begged him to come with me on the rest of my route. I told him about the man at the end of the street. I cried from fear and shame.  He wouldn't come. He told me to just finish the route.  I was on my own.

From that day on, I changed my paper route daily trying to outsmart the predator.  I asked a friend to join me and many days he did. I did all the other streets before his so that it perhaps got too late for him to wait.  I'd wake up early to try and finish before he ever woke up.  I was a paper girl for four more years and had to plan daily to outsmart him.  If I saw him waiting, I wouldn't deliver to his house.  I'd be fined for "forgetting" weekly by the newspaper company. But even then, I knew that I had to save myself.

How many of us told and weren't believed? I am here to say "I believe you."

My second encounter with sexual assault and harassment lasted for years but began when I was a junior in high school.  I was a basketball cheerleader and one night, right before the game, I realized that I forgot my kick pants.  Needing them for obvious reasons, a friend drove me home. I dashed into my house and into my first floor bedroom where, not pulling the shade, I pulled on the kick pants and dashed back out to the idling car and the awaiting friend.  When he turned the headlights on in the car, there, at the end of my driveway, peering into my bedroom window was a father of a high school classmate. I screamed and bolted back into my house where I told my father who followed me back outside.  There, across the street from my house, the father of my high school classmate was getting back into his blue pick up truck.  My father asked politely if he could help him.  The man said no and drove away.  My father told me that it was fine and to go to the game.

There, sitting in the front row of the bleachers at the basketball game, was the man...who just minutes before was peeping into my bedroom window.  He was leering at me from under his bushy brows. Eyes piercing through me.  And I was truly terrified.  I stopped sleeping well that night and for many nights after that, thinking about how very easily my first floor bedroom window could be broken, wondering how many times he had peered into my window that I didn't know about, embarrassed and ashamed of myself for leaving the shade up so many times.  Luckily, shortly after, I was able to move to an upstairs bedroom, but the man continued to haunt me. He once peered into a boyfriend's living room window while we were lying on his floor. He attended all of my high school events; concerts, football games, basketball games, and shows staring at me menacingly. This man and his x ray eyes made me feel exposed and thoroughly alone.  Leaving those events I felt a terror like no other terror nip at my heels until I was safely in a car or behind my home's locked door.

Do you feel alone because of a sexually harassing encounter? You are not. I am here. I know how you feel. I stand with you.

My third encounter with sexual assault came during my senior year of college as a student teacher. I was fortunate (I thought) to be placed in a highly respected large district where my cooperating teacher was writing a teaching book for the well-respected publisher, Heinemann. My experience was a dream and on the last day, at the urging of my college, I went to the principal's office to thank him for his school's hospitality.  I had never met him, never saw him, never had a conversation with him before that day, that moment.  I went in to the main office.  I brought a bagel and cream cheese platter for the secretaries and for him.  He greeted me sweetly and invited me into his office.  I followed willingly and smiled as he shut the thick wooden door.  Before I knew it, and seemingly in one giant step, he had advanced toward me, grabbed me and shoved his tongue down my throat, fiercely exploring my mouth for what seemed to be eons. He finally let me go, walked to his door, opened it, winked, and thanked me for coming. I walked into my cooperating teacher's classroom with wobbly legs I was sure would not hold me and relayed what had just happened. Instead of supporting me, reassuring me, standing up for me, she and another teacher glowered down at me. They furrowed their brows and asked what I did to encourage him. Had I met with him in private before? Didn't I tell him no?  They punctuated all of this with a final statement of how I'd never get a job if I spread nasty lies like that. And turning from me, they walked out of the classroom and began to whisper with other teachers out in the hall.  I remember feeling so incredibly dirty.  Dirty and ashamed. I wandered through the rest of the day in a daze cold with fear that the principal would walk through the classroom door and want more. I went  home to shower. But there was no amount of scrubbing that would wash off the filth of shame that permeated my skin.

Do you feel ashamed because of your own experiences with sexual assault? Did others accuse you? Did they say it was your fault?  I am here to say that it is never the woman's fault.  Never. No  matter what. You are innocent. It shouldn't have happened. That is the only truth you need.

Sadly, there are other moments of sexual assault, other horrible moments that have seared themselves into the fiber of me  And maybe someday, I will share them as well.  But as I finish this post, I am horribly aware that my stories, the ones shared and not shared, are nothing compared to other stories that other women carry with them.   And it hurts me, every bit of me, to think of the weight they must have pulling them down because I know that my own small examples felt so very heavy.

But, my wise friend, Amy, was right. Sharing them, sharing my stories have somehow lightened that load.  Especially knowing, that my stories will now mingle and connect with other stories, that will hopefully liberate other women to share their stories of assault so that soon the din of our voices will drown out the misogynistic voice of Donald Trump and silence him forever.