Monkey Hear-Monkey Say: An Apology to My Husband 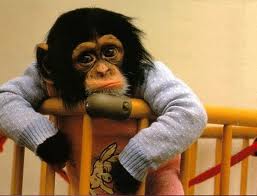 My toddler has developed this endearing habit in which she poses a question, (Apple juice please?) and then answers it before the adults in charge do with a very emphatic "SURE."  Trust me when I say that this has to be the cutest utterance in the universe.  "Read a book please?  SURE."  "Go outside?  SURE."  "Kiss the boo boo.  SURE."  What made it uber adorable was the fact that this 20 month old knew the word "sure."  The first time she uttered it, my husband and I looked at each other and marveled, "Where in the world did she come up with THAT one?"  We figured it'd be just one of those mysteries of toddler-dom.  That is, however, until I spent the entire weekend with her--just me and Ila all day Saturday and all day Sunday.  It was during this time while making Ila's lunch that she asked for a pepper and I in a very familiar sing-songy tone answered, "SURE."  The exact nature of the answer stopped me in my tracks.  The way my voice sounded was PRECISELY the way that Ila had been saying it, and I knew at that moment that she had not only picked up the word from me but the tone as well.

Okay, I know.  This isn't earth shaking.  Every parent knows that small children will do as you do, think as you think, act as you act, and speak as you speak.  We all KNOW that.  I KNOW that.  But knowing and being cognitively aware of that fact are two different things, as I learned this past week.

After this occurrence, I vowed to be ever present in the knowledge that Ila will most definitely pick up things from my behavior; the good, the bad, and the very very ugly.  At the same moment that I made this promise to myself, it dawned on my that I HADN'T been cognitively aware, I HADN'T been PRESENT in what I said, what I did and the way I acted when raising my boys...the boys who are now 14 and 17...and have some pretty bad habits when it comes to the way they talk-- ESPECIALLY to their step-father.  Was I partly responsible for this?

Since Gannan has moved out, this lack of respect for his step-father has seemed to change a tad.  (Absence DOES make the heart grow fonder, perhaps?)  But for Aidan, over the past couple of years, the disregard for Jeff, the animosity he harbors, to put it bluntly, the way he treats Jeff (and sometimes me) goes beyond  basic teen sassiness.  His voice can be cutting, down right abusive at times.  He name calls.  He bellows.  He slams.  If questions don't get answered the way he wishes, he snaps.  If he is spoken to at what he deems an inappropriate moment (which, by the way, is every moment of the day) he snipes.  Jeff just simply call his name, and that tone--oh that tone--dripping with sarcasm and irritation rises up out of the teen palace and slaps Jeffrey in the face. My oldest sometimes speaks to Jeff as if his very existence on this Earth annoys every fiber of his being.

Now I am not saying that my oldest shoulders all the blame.  Some of it is due to those raging hormones.  Some of it is due to some poor choices that his step-father made over the years that caused Aidan to lose some of that respect for him.  Some of it is due to mimicking the behavior of OTHER adults in his life, and some of Aidan's behavior stems from the fact that Jeff and he are like fire and ice, oil and water, sardines and ice cream or any other combination that you can think of that just simply doesn't mix well.  However, dear readers, after my discovery this past weekend and my vow of cognition, I started to question if his lack of respect for Jeff had ANYTHING to do with me.

So I set out this week to watch myself closely, to listen carefully to the utterances that left my lips only to torpedo through the air toward Jeff passing through my sons' (and daughter's) ears on the way. And...dear Mudders, can I admit to you that what I heard and witnessed makes me so ashamed of myself?  Let me first preface this with the good news:  I didn't call names. I wasn't abusive.  I didn't slam., and I didn't bellow. (Okay I USED to bellow but for several years have curbed this nasty mommy habit.)  But, dear readers I sniped.  I snapped.  My tone--oh my tone--when speaking to Jeff, it sometimes dripped with slicing sarcasm.  Irritation occasionally poured out of every pore.  And, yes, sadly, sometimes when I spoke to Jeffrey it was like his very existence on this Earth annoyed every fiber of me.  Sound familiar?  It should.  Aidan's tone--oh that tone--is my tone, and I am ashamed.

And so Mudders, this week's blog is meant to represent an apology--no no--to represent apologies.  First, to say to my husband how sorry I am that during moments of frustration or disagreements that I didn't treat him with the dignity that he so immensely deserves.  "My dear you are a human being not a pin cushion.  I am heavyhearted that I sometimes forget that." Secondly, I need to apologize to my sons.  I didn't always model for you how necessary it is to be reverent to all who dwell on this planet, especially loved ones. For that I am truly sorry.  But with this apology, oh sons of mine, comes an urgent plea: to not do as I did, to not say as I said, but to join me in trying to be more aware of how we speak to one another.  Habits are not so easily broken, and so, I will gently remind you to speak with reverence.  I hope you will remind me as well.

Now I ask you  my dear husband and sons,  in the way that our sweet Ila would ask, "Apology accepted?  SURE!"
Posted by Unknown at 6:32 PM