June Cleaver Versus The Sourpatch Kids 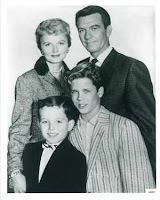 When my sons were young, I used to love to pretend to be June Cleaver.  Apron tied around my waist, I'd call my family to come and enjoy their homemade dinner.  I'd sit down last (after everyone was served) and then wittily ask my two sons to tell me about their day, both the wonderful and difficult parts. Serving seconds of meatloaf, I would sit enraptured as each son spoke.

When my sons were young, we'd pack the car on Sundays with sodas and sandwiches and Sesame Street songs and take a drive to nowhere.  Jeff would call them our Sunday Adventures and as we drove, we'd play "I'm Thinking of Something"  round and round until our minds were weary.

When my sons were young, we waited with baited breath for the next Disney or Pixar cartoon to be released.  We usually were the first to arrive at the movie theater.  We'd buy our tickets and load ourselves up with popcorn, candy and soda and position ourselves in the best seats possible.  Afterward, in the car, we'd ask each other about our favorite parts, laughing all the way home.

When my sons were younger, we'd scrape and scrounge pennies to take them on  yearly beach vacations. While I lounged in my chair reading books and drinking  Mai Tais, Jeffrey and the boys with their fresh crew cuts would build sand castles, ride their boogie boards and play Frisbee until our skin was crispy from the sun.

Let's just ruminate on those Rockwell images for awhile....Beautiful aren't they?  Sigh.  Too bad these scenes are in the past, long past.  Double sigh.....

Why past not present? That answer is complicated.  Be it the two very different paths my sons walk, be it the polar opposite personalities bestowed up on them, be it the pubescent raging hormones that are coursing through their adolescent veins, somewhere along the line, slowly, so slowly it was almost unnoticeable, the boys began to develop a rivalry that now is as intense as trying to eat 13 Sour Patch Kids at once.

I am a reader at heart and so the moment that their incessant fighting and bickering and whining began to suck the life out of our home, I attacked my local book store and spent their college savings on any parenting book that looked promising.  I tried it all.  Let's see, there was the time I tried to have them sit at the kitchen table and talk out their differences.  The discussion turned into a shouting match which then led to chest thumping in front of toppled over dining room chairs.  When civil discussions didn't work I then moved on to the idea of "removing the audience."  When disagreeing, I took myself out of it and insisted that they try to work out their differences in a fair way.  That strategy ended up with Gannan locking himself in our car and Aidan pounding on and cracking the windshield trying to get his stolen gum. Hey!!  What a GREAT solution huh?? Clearly this was bigger than me so from there, I arranged a counseling appointment.  Here we finally had a moment where the boys united as brothers.  They both giggled and poked fun at the therapist's questions throughout the whole session only to pummel each other during a basketball game when they got home.  As a final resort and ignoring the gagging gestures, I suggested that we all say one reason why we love each other before eating dinner.  But the fighting escalated despite all the "brilliant" parenting.  They were so crafty in their disgust for one another that they could dig and rib even while professing their love during the a fore mentioned dinner ceremonies.

How could a mom not be proud of that creativity!?

They can honestly make a fight over anything even if the other doesn't mean to argue.  Take for instance last night:
Gannan:  Mom, listen to this song that I found.  I love it.
Aidan:  Oh my god mom!!  He is just trying to drive me crazy!
Me (Bewildered):  What are you talking about?
Aidan:  He knows I found that song first.  He just likes it because I do.
Gannan:  No!  If that was true how would I know all the words?

The fight in my children never ceases to amaze me and I marvel that they held out through 5 different books of parenting strategies.  They are consistent those little buggers.  I have to admit it.  Not one book recommendation worked. (Those authors clearly didn't have children with the will power of my sons!)  So, I have turned to a drastic measure:  Complete separation.  That is right.  I said complete.

No longer the Cleavers, we don't eat dinner together.  Instead one child eats with a parent at a specific time and one with the other.  We don't go out to dinner together.   We don't even all get in the car at the same time.  We've even gone so far as to say one boy must be downstairs in the finished basement if one is in the living room.  A little extreme?  I'll give you that.  But don't forget I now have to think of little Ila whose infant brain would soak in all that negative energy.  I made a decision to give her the life that the boys had when they were young, happy dinners, Sunday drives, beach vacations and time spent together.  Even if the boys refuse to act like Beaver and Wally Cleaver, she deserves that.  Now, if I could only remember where I put my apron.


Muddled Mothers!  How do you handle sibling rivalry and fights in your family?  Please comment with your suggestions!
Posted by Unknown at 9:14 PM