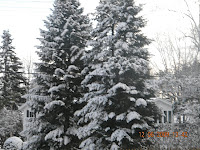 A few weekends ago,  Jeff and I whisked Ila into her stroller for a walk on a rare sunny winter day in upstate New York.  As we rounded one corner,  the sun shined on her face and I found myself moving my body so that my shadow protected her from the light.  With each new angle of the road, I would contort and twist, bound and determined to keep those scary UV rays off of her pristine nose and rosy cheeks, even though just minutes before, I had slathered her with baby lotion that contained an SPF level higher than Paris Hilton's IQ.
Mid contortion I couldn't help but notice a specific annoyingly snarky sigh that Jeff often gives when he wants me to know he disapproves of something I am doing.  "What?!"  I said perhaps a little too quick and a lot too sharp, and perhaps a little too slowly and a lot too chipper, he answered, "You did that with the boys.  Let's try not to do it with Ila."  First, by 'let's' he meant me, and second, what was he talking about?  As if reading my mind he responded, "Logan, you put the lotion on her.  A little sun won't hurt, and...."  He paused.  Through gritted teeth I said, "Get to the point!"
"Sweetheart, you can't protect her from everything."
And there it was.  I would like to tell you that this was news.  That it was one of those moments in which a bright beacon bathed me with enlightenment while a choir of angels sang a harmonic "Alleluia."   But I was aware. In fact, I was painfully aware of my tendency to indulge my children in order to spare them any hurt whatsoever.  Since Aidan and Gannan were children of divorced parents, I figured that that was an ample amount of  hardship for any kid and that coddling them was what they deserved.  Oh okay, perhaps their gratification satiated my guilt as well.  But who among us hasn't parented out of guilt?  Can I get an amen?
However, with Ila I found that I still had that drive to keep her from all things unpleasant.  She cried at bedtime, I'd pick her up, saying to myself, "Oh I guess she's not sleepy after all."  She complained when on her belly, I flipped her over immediately.  So what if the experts said she needed to learn how to roll over.  She'd rather play in her saucer then practice sitting in her Boppy?  Then by all means, let me put her back in the saucer!  But Ila isn't a child of divorce.  (As long as Jeff gets a hold of those snarky sighs.) Therefore something else must have been driving this compulsion.  So for the last few weeks, I looked closely at my motivations every time I reacted in ways in which I was trying to rescue Ila from peril.
What I found out is hard to admit, not earthshaking, but embarrassing for sure. Every crib rescue, roll over, and saucer appeasement wasn't for Ila.  Nope.  It was for me.  Let me explain.  It is far easier to deal with a happy child than a child who is crying or whining.  A happy child allows me to continue on with my busy life.  An unhappy child needs my attention and sometimes, I just don't want to give it.   It wasn't Ila's discomfort that I was trying to spare.  It was my own.  The knowledge of that hit me full force.  Not because I thought that I had done Ila harm.   Her meager 6 months would allow her to unlearn any behavior that I contributed to.   No, it was because I knew, that more than the guilt, it was the immediate ease of pacifying the boys that fueled my indulgence with them as well.  By entitling them all these years, I left them ill-equipped to handle adversity.  I know now that undoing that will be one of the hardest jobs this mother has faced.  At least Ila could benefit from the introspection.  I have a sneaky suspicion that this is not the last time I'll have to do some self-examination on this leg of my motherhood journey.
This past weekend was springlike and Jeff and I once again took our daughter on a long walk.  At one point, a sleeping Ila stirred when a cloud parted and a beacon of sunlight lit her face.  Jeff immediately moved to pull up the hood of the stroller, but I gently nudged his arm and said, "A little sun on her face won't hurt her."  He smiled, and as we moved along, all four of our hands pushed the stroller together.   No Alleluia Choir but enlightenment just the same.
Posted by Unknown at 12:38 AM